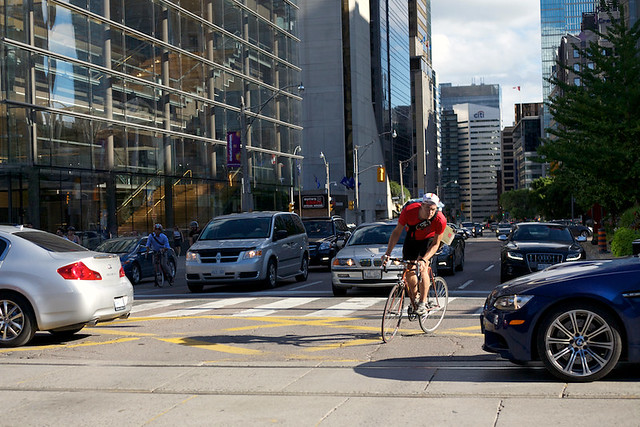 Cycle messenger Kevin Barnhorst weaves through traffic. Photographer Christopher Kaiser reveals how he got this shot below.

In our just-released special FOOD issue of dandyhorse, photographer Christopher Kaiser shot Toronto courier Kevin Barhorst for our extended centre spread "Tour vs Street" in which we put Barnhorst head-to-head with Canada's top professional rider, Ryder Hesjedal, on calorie counts in a typical day in the saddle.

The results are fascinating and the photos are incredible. We will launch our new issue on October 3 at Parts&Labour.

Here, we introduce you to our newest and dandiest photographic contributor, Christopher Kaiser:

When did you first see dandyhorse?

A few years ago, some friends working at a bike shop brought me a copy.

When did you decide you wanted to get involved?

Well, a lot of my photography seems to be bike centric since it's such a big part of my life, so I knew I'd have something to contribute sooner or later, the timing just seemed to work out recently. I ride every day.

When did you start taking photos?

Since before I remember, I had a film SLR around the house growing up and loved playing around with it. It has always been an interest, but I would say, increasingly, in the last three years I have been taking it more seriously. 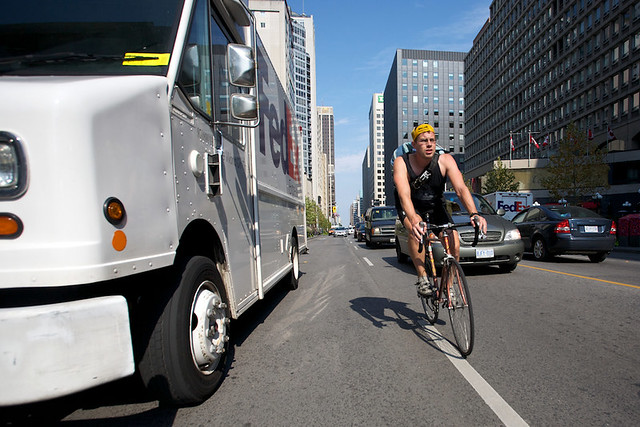 What did you think when you were asked to shoot courier Kevin Barnhorst in traffic?

I thought it was great, and immediately started thinking how I'd go about doing it. I knew I wanted to be right in it with him and most of the shots were during his working day, while he was doing calls. I have shot friends while riding; just riding no handed, which usually just ends up being back shots, but to get the head on shots I had to do something different.

How did you come up with the special rig for your camera?

I have had the idea in my head for a while, just never implemented it. So this was the perfect opportunity. It didn't take long. I just used a bike rack, and ripped apart an old tripod and used hose clamps to fasten it to the rack. I put my good tripod head on and ran the remote shutter release to my top tube, so I could easily reach down and take photos. 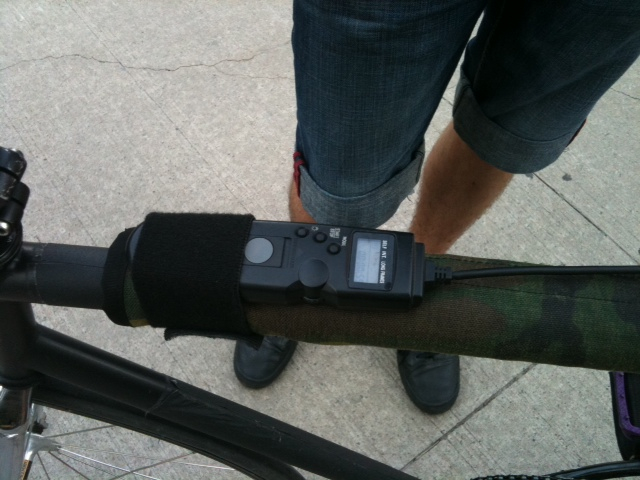 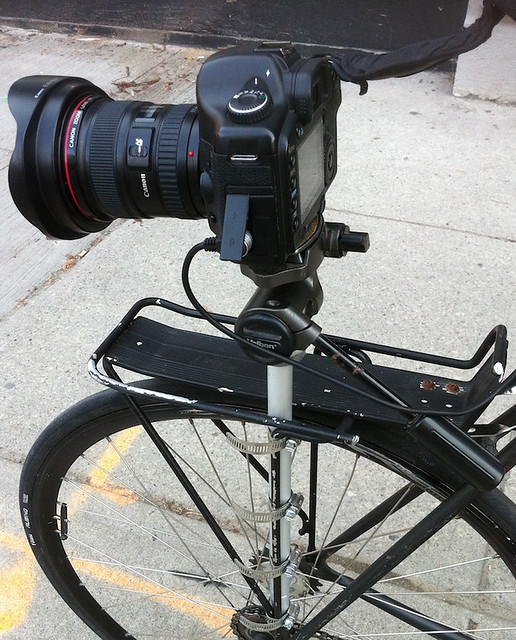 What hazards did you come across during this shoot?

Not too many, just the usual hazards of riding in the city, plus Kevin is fast, so keeping ahead of him and shooting was a bit precarious at times, especially on the camera. Even though the rig is steady, the camera is pretty heavy so it shook around a lot, especially on the rough roads. One of my lenses actually fell apart during the shoot, though it was already on it's way out, so I wasn't surprised. I had repaired it a few times prior and it would only work when I left a few screws out. The vibrations must have shook the rest loose, and it literally slid out of itself and smashed to the ground. 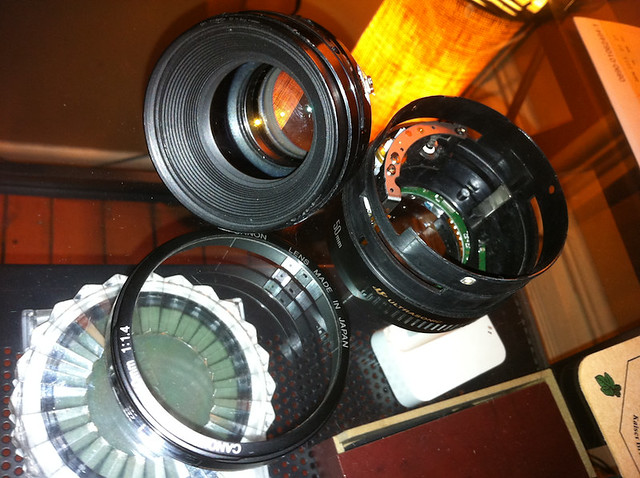 What was the most enjoyable part of the shoot?

Almost all of it. Having an idea, implementing it and having it work out well is really rewarding. Once I realized that what I was doing was working, I started to enjoy it all. Kevin is also really easy to work with, and didn't mind me taking a few minutes to change things up when I needed to.

Can you describe some of the photos for us and what was involved in getting all those great photos?

I set the rig up the day before I was meeting up with Kevin, but it was hard to test it without a subject. I decided to ride around the city and get myself in front of cyclists and try and get some shots. I managed to get one decent shot of a guy near Dundas Square, but not much else.

The next day with Kevin I was still unsure how well it would work out. We met at Bloor and Jarvis, I set up my camera and looked in the viewfinder to see where he showed up in the frame. I set the focus point to how I wanted to frame it and told him the approximate distance he needed to be behind me, and soon after that we were off to Bloor and Avenue. On the way I constantly took shots. I could only hear the shutter click half of the time, so I wasn't sure what I was getting, I looked back to check our distance often and kept on shooting. He dropped off his package at Avenue and I watched his bike for him while looking through the shots to see how they were turning out. I made a few adjustments and we kept on riding.

At Yonge and Davisville I switched up the camera a bit more and we headed back down to St. Clair, where I decided to switch lenses. It was coming to the end of his day and we were finishing off the last of his calls, so there wasn't much time to review the shots. His last call was to Casa Loma, which was perfect for getting the monument shot the editor wanted. Kevin, Kai (Kevin's girlfriend) and I hung out for a bit on the Casa Loma steps and looked over the photos. I took note of a few that stood out, and we decided to meet the next day to get the rest. Looking through the photos at home that night I made some notes on which techniques worked and the ones that didn't. 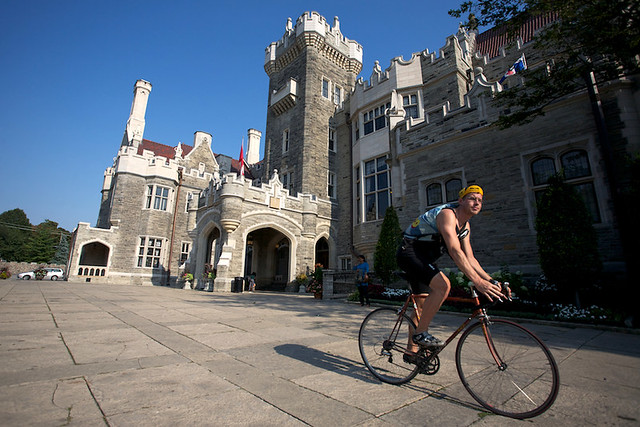 On delivery at Casa Loma.

The next day we met up at Spadina and Front, and headed north. After searching for a strange address, Kevin got his delivery done, but had to rush to his next call. We decided that we'd meet up later, and he sped away. 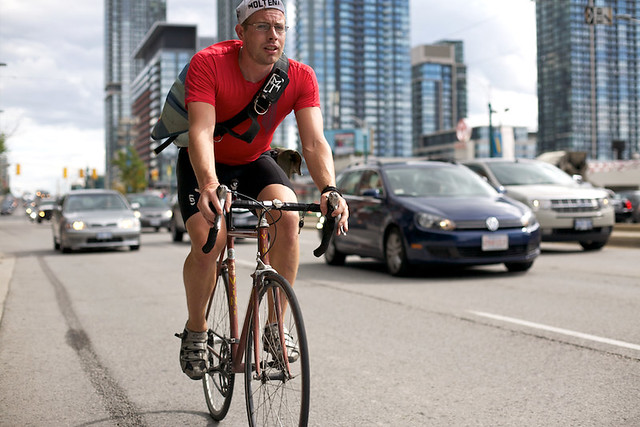 This is when my lens fell apart. I decided to make my way to College and University, where we planned on meeting up. Just after crossing Spadina, as I headed down Sullivan Street, I heard the lens crash down behind me. I knew it was coming. I laughed, and headed to a camera shop to grab a replacement. I texted Kevin the news and we decided to meet at old City Hall. He was done his work day, so it gave us time to focus on getting the photos we needed. I had him ride by in front of old City Hall a couple of times and took a few shots before heading to Queen and University. 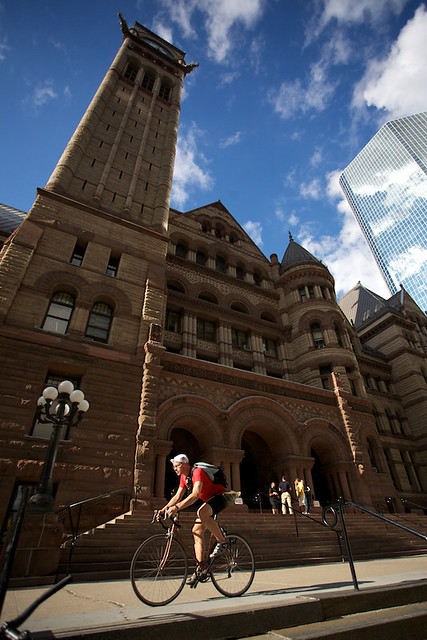 I stood in the street as he rode up University towards me and hopped out of the way just as he and the traffic got near. An angry driver honked and yelled at Kevin saying that he was going to "run him down". It's not unusual to get that sort of a response as a cyclist in rush hour traffic, sad to say.

I was through with using the rack set up and resorted to shooting while riding no handed for the rest of the day. Kevin and I headed up to College and University to get a few shots of him riding south with Queens Park in the background. The photos weren't turning out how I had pictured and we turned back down University, lane splitting (aka "stripe-riding" or riding in between cars) in the gridlock traffic, while I kept shooting. 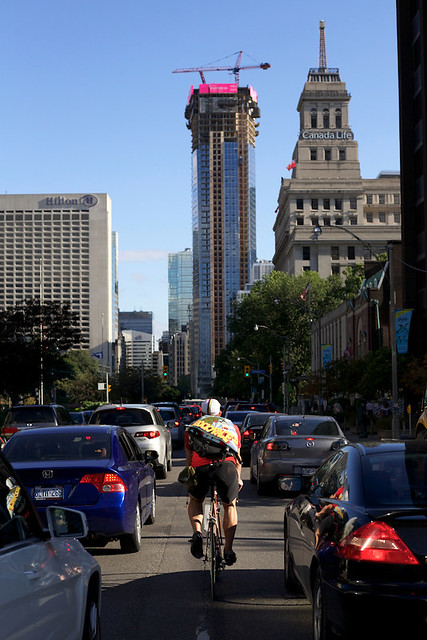 We turned west on Richmond and made our way to Bathurst and Front. I ride down Bathurst most mornings on my way to work and had that spot in mind, just as you cross over the train tracks, south of Front Street. I hopped off my bike and stood up on the steel barrier on the opposite side of the road as Kevin rode by, making sure to get the CN Tower and all the new construction in the shot. (Editors note: You can see this fantastic shot on page 30 of the just-released FOOD issue and at the end of October in our interview with Kevin Barnhorst about his work to help unionize bicycle messengers.) Afterwards, we cruised down to the Lakeshore and took a rest down by all the yachts, I took a few more photos and then headed to meet a few other couriers for some dinner and drinks in Kensington market. And that was that. 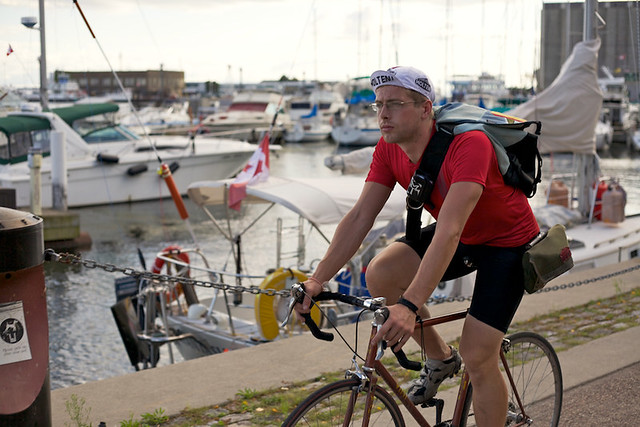 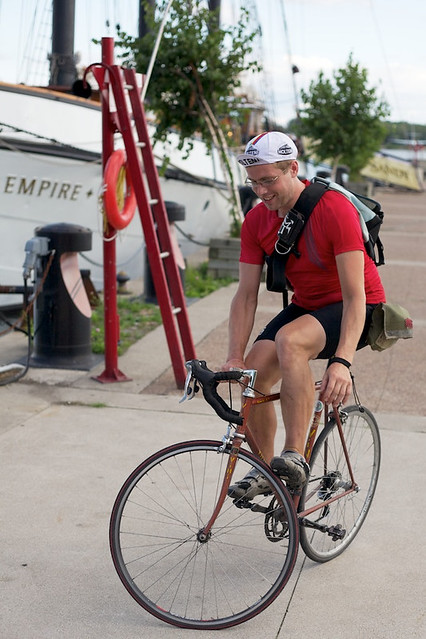 Kevin Barnhorst on the waterfront and a playful track stand.

What has been the high point of your photography career so far?

I'm not sure that my photography career has started yet, but I'd say my trip to Southeast Asia at the beginning of the year was a high point in my photography. Most of those photos have yet to see the light of day, though. Soon.

What do you think the city could do to make cycling safer for cyclists?

Rebuild the city. The infrastructure is just not there, there is just not enough room on most roads for it to be safe. It will take time. 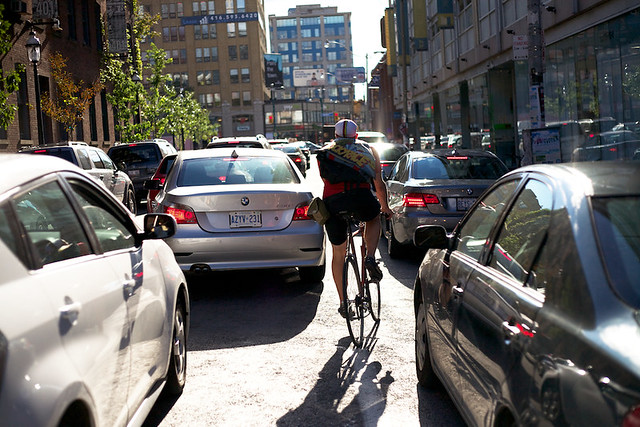 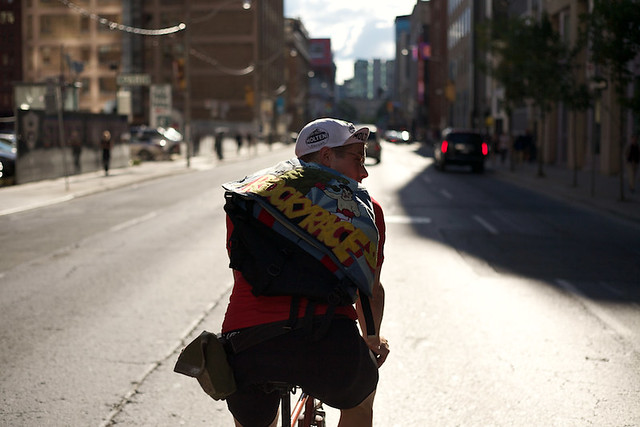 You can see more of Chris' work regularly on our our website and in our new FOOD issue - launching at Parts&Labour on Monday, October 3.