Did you know, Peterborough held the first ever provincial meet of the Canadian Wheelman's Association on July 1, 1898.

In 1898, Peterborough is a city of possibilities. Growing, prosperous and attracting new industry, the community is called ‘The Electric City" as Canada’s first municipality to use electric streetlights. In the 1890s, the bicycle represents technology, modernity and progress and Peterborough’s civic leader’s see those traits in their own community. It’s only natural they want to host the Canadian Wheelmen’s Association’s Ontario meet.

Twice perviously, Peterborough had fought and lost the right to organize races. In 1896, they went head-to-head with Quebec City to capture the C.W.A.’s national meet. During presentations, D.W. Dumble notes Peterbough has the fastest track and the best hotels in Ontario, adding “I am the police magistrate and I guarantee that you boys will not be dusturbed.” “Come and see the show place of the Dominion,” responds Quebec City Alderman Cook. “We have no police and will give you the best time you ever had.” Quebec’s capital wins the vote in convincing fashion.

But 1898 is different. Ottawa is favoured, but a surprise vote hands Peterborough the meet. “Three times and out!,” writes the Toronto Daily Star. “Twice Peterboro has been beaten for the C.W.A. meet, but this year they won, and on July 1, 1898, the energetic town of Perterboro will be flooded with cyclists.”

In 1898, the C.W.A. represents 93 clubs across the country and nearly 10,000 riders. The bicycle is viewed as a crucial element for employment, growth and future prosperity and the influence of the Canadian Wheelmen’s Association is so strong they succeed in pasing bills in the House of Commons and in provincial legislatures. In 1897, lobbying efforts by the Wheelmen encourage Queen’s Park to pass a law classifying the bicycle as a vehicle entitled to travel on highways. The Wheelmen developed the nation’s first comprehensive system of road signs and route maps.

On June 30, cyclists from clubs including the PIcton Rough Riders, the Toronto Bohemians and the Ottawa Thirteen stream into Peterborough by train and bicycle. As many as 5,000 C.W.A. members, familes and friends visit. As the ‘special’ carrying Toronto’s Athenaeum cycling club arrives at midnight at the CPR Depot, they are greeted by one thousand locals. “Rockets and roman candles enveloped the train in there many hued lights, While cannon firecrackers nearly blew them off the track,” the Peterborough Weekly Examiner writes of the spectacle.

By the time the two-day meet begins with an one-mile amateur novice contest, an estimated 7,000 people have assembled. Amateurs and professionals compete for titles in 17 different categories, including half-mile, two-mile tandem and three-mile team. Clubs complain that spectators spilling on to the course are causing spills.

The one-mile amateur race ends with a fight on the track after Brantford’s Alf Sherrit crowds Ottawa’ Bicycle Club’s Frank Wilson into the fence and both men and their wheels ended up on the ground. “Sherritt was the first to rise out of the dust cloud and he made for Wilson,” Toronto’s Globe wrote of the event. “The later stood on his guard and avoiding Sherritt’s blows as well as he could managed to get in a few good jabs on the big fellow’s face. This went on for nearly five minutes before they could be separated.”

The weekend features bicycle parades, trick riding, concerts, fancy dancing and spontaneous outbreaks of “Rule Britannia,” and other ‘patriotic’ songs. The Toronto Star writes that one notable feature of the meet is “the absence of excessive drinking.” CWA members overindulge instead, in setting off fireworks. Several fires occur, but the fire department extinguishes them before "real dammage" occurs.

The last of the Wheelmen depart the city on the Sunday with the meet judged a success. “The visitors made lots of noise whilst they were here, but there bark was worse than their bite. Little or no damage of any account was done,” summarized The Weekly Examiner. “No one can ever say again that Peterborough can’t accommodate a crowd.”

Read more about Peterborough and bicycle history at: https://thebicyclemuseum.ca/

Or pop by the pop-up version of The Bicycle Museum at B!KE on George St. to see the images and our fabulous replica high wheel bike in person. 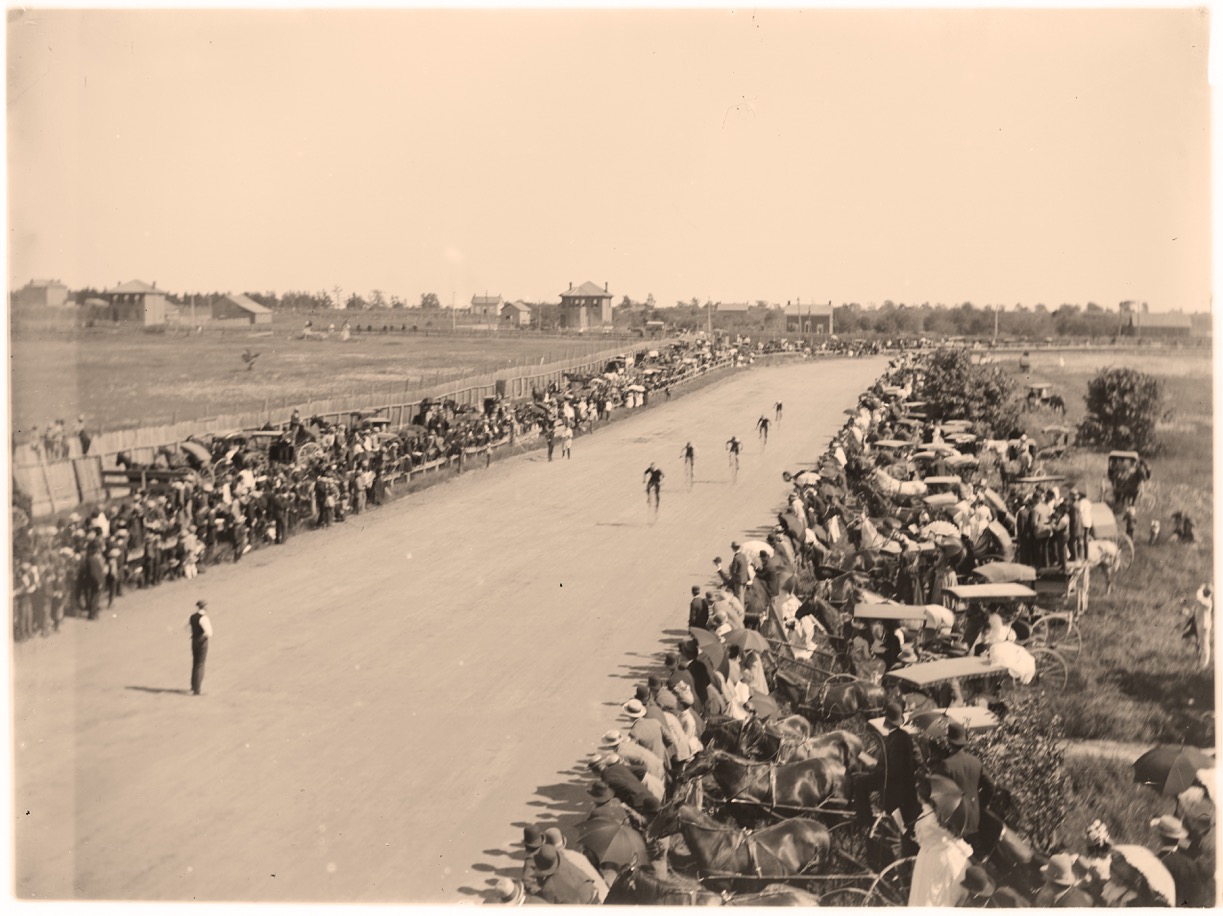 These images are from the Peterborough Museum and Archives Balsillie Collection of Roy Studio Images.

The image at the top features a high wheel bicycle race held at the Ashburnham Cricket Grounds circa 1890.

The image directly above was thought to be of a race at Morrow Park in Peterborough but is in fact most likely from the Niagara region.

Do you know more about these images? Please email thebicyclemuseumptbo@gmail.com or come to one of our pop-up events in Peterborough, Ontario.

On December 3, 2018, the pop-up rolls on over to the Peterborough Public Library!